The RBA’s mandate is to target inflation within a 2-3% band over the course of the economic cycle. This target was established in 1993, formalised in 1996, and we have not seen double digit cash rates since then. Prior to the 90’s there was no inflation target in Australia.

The RBA’s mandate is to target inflation within a 2-3% band over the course of the economic cycle. This target was established in 1993, formalised in 1996, and we have not seen double digit cash rates since then. Prior to the 90’s there was no inflation target in Australia. 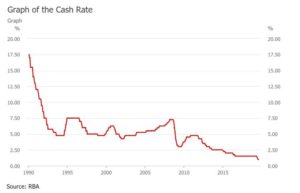 The highest we have seen the ‘RBA Cash Rate’ since Australia has maintained this target is 7.5% in 1994/95 when the government was using monetary policy to keep ‘inflationary expectations’ under control (i.e. through a high cash rate). The formalisation of inflation targeting by the RBA in 1996 saw these inflationary pressures disappear almost immediately.

The next peak was in 2007 with a cash rate of 7.25% for only six months during the ‘once in a lifetime’ resources boom, during which the Australian economy was extremely overheated. Within seven months, the cash rate had fallen to 3%, as another ‘once in a lifetime’ event (the GFC) hit. The cash rate is now 1%, and (as per the RBA’s mandate) will remain this low until there is an inflationary reason to increase it. With inflation currently at 1.6%, below the RBA medium term target of 2-3%, the RBA does not currently see a reason to increase the cash rate.

Due to the large impact of the GFC, many economists and market analysts expect inflationary pressures to be low for an extended period of time. The RBA now equates a neutral nominal cash rate of around 3.5% (see under ‘Considerations for Monetary Policy’).

And Australia isn’t the only one – low cash rates has become the norm internationally.

The United States cut its cash rate in July 2019 to a target range of 2-2.25% as US inflation remains subdued and the economic outlook has deteriorated amidst ongoing trade tensions with China.

China has recently lowered its interest rate to 4.25% in August, which is a record low.

The Eurozone has maintained the ECB rates at zero percent since March 2016 and has noted it is already making preparations for more quantitative easing zero (or lower) interest rates expected through the first half of 2020.

The Bank of Japan’s key short term interest rate is negative at -0.1%, where it has been since January 2016.

The RBA is mandated to increase inflation so there isn’t pressure to increase cash rates in the short term. The world will still be pulling itself out of the GFC aftermath for many years to come and we should be prepared for low rates over the medium to long term.