Why gold is proving the new standard for central banks

Why gold is proving the new standard for central banks

While a desire for the return of the gold standard might be the realm of anti-establishment economists, internet conspiracy theorists, and Donald Trump (who arguably qualifies for both the aforementioned categories), choosing to hold gold as an asset is proving increasingly popular amongst some of the world’s most important central banks.

While a desire for the return of the gold standard might be the realm of anti-establishment economists, internet conspiracy theorists, and Donald Trump (who arguably qualifies for both the aforementioned categories), choosing to hold gold as an asset is proving increasingly popular amongst some of the world’s most important central banks.

With the current political and economic uncertainty affecting global markets, there has been a reduction in the attractiveness of the US dollar as a reserve currency and an FX trading pair. Notable however is that instead of seeking haven in other global currencies, countries are winding back the clock and looking to gold as an alternative safe-haven.

The desire to limit exposure to the US dollar isn’t exactly new; nations like China and Russia have been looking to reduce their dependence on access to US dollar markets and dollar reserves for some time now. However, given the recent developments in US-China trade relations and the continuation of the Obama era Russian sanctions, this need to diversify away from the dollar has become more pressing.

From the perspective of China and Russia, the shift to gold from the US dollar is doubly advantageous; not only are they less beholden to the whims of the Federal Reserve and the US government more importantly, but their buying gold in large quantities has the effect of depressing the value of the dollar as well.

A depreciated dollar reduces the benefits that the US accrues from the dollars position as global reserve currency of choice. These advantages include seigniorage (the value difference in the creation of physical currency), lower international borrowing costs, reduced exchange risk, and leverage/soft power. 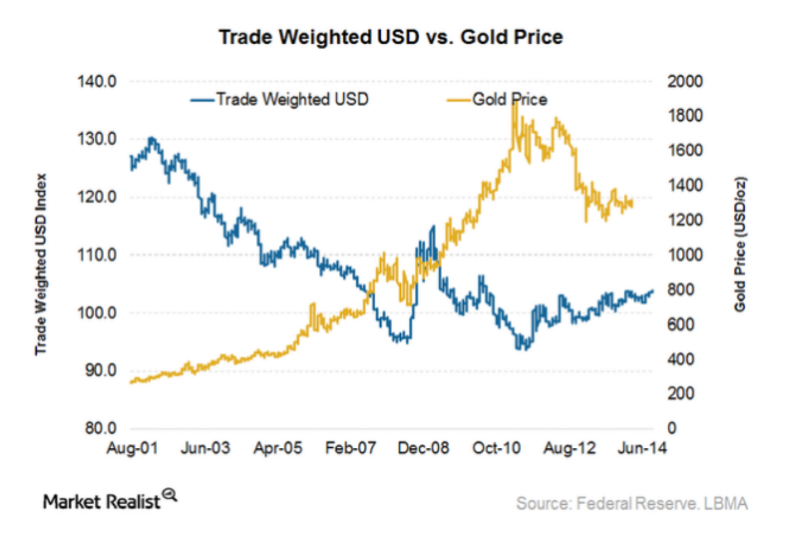 The inversion of the value of the dollar against the price of gold has been a long been a “chicken and egg” argument, as well as a correlation or causation discussion, but nevertheless it is a principle that has held true historically since the Nixon Shock and the end of the Gold Standard.

In fact, the resulting trend away from the dollar and towards gold has been so strong that Marketwatch estimates that of all the total gold reserves that have been extracted throughout history, 20% is now held by central banks. Globally, central banks have been net buyers of gold every year since 2008.

With gold proving to be such a popular haven from the fluctuations, uncertainty and downright insanity of the present economic and political environment, investors couldn’t be blamed for wondering what impact this could have on their own portfolios.

It bears remembering that central banks generally have different ambitions to investors. It may sound obvious, but the major central banks generally look to create stability in their economy, rather than generate returns in the same way investors do. As such, while gold as a store of value may appeal to economists, gold and gold mining as a stock opportunity is what should be exciting investors.

Gold explorer PVW Resources is intending to seek a listing on the ASX in Q4 2018. Register here to get the details of this opportunity when they become available.