CAR-T therapies have heralded a genuine paradigm shift in cancer treatment, by genetically modifying a patient’s own T-cells to recognise and kill cancer cells that are otherwise hidden from the patient’s immune system. They have generated unprecedented response rates for patients with certain types of haematological cancers. However, current CAR-T approaches also face considerable challenges, including manufacturing, safety and adaptability, that limit their broader use.

Prescient’s new OmniCAR platform seeks to overcome several shortcomings of CAR-T. It is formed from technology exclusively licensed from CAR-T pioneer and world leader, the University of Pennsylvania in the US, as well as the novel “SpyTag/SpyCatcher” molecular binding system Prescient has also licensed from Oxford University.

In describing the objectives of the “next gen” universal OmniCAR platform, Prescient CEO Steven Yatomi-Clarke, drew an analogy between a sniper training to hit one target with one bullet and out on a mission without any communications back to base (current CAR-T capability) and a universal soldier, armed with multiple weapons, capable of attacking multiple targets and in full communication with base (next-gen CAR-T). 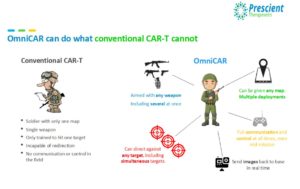 “This is a transformative achievement for Prescient that allows the company to move quickly forward with the development of innovative new cell therapy products for oncology,” said Mr Yatomi-Clarke said.

Cancer treatment is gradually changing – moving from traditional treatments to genetically modifying a patient’s own cells to recognise and kill cancer cells that are otherwise hidden from the patient’s immune system.

However, the latest round of cell therapy methods faces considerable challenges, including manufacturing, safety and adaptability, that limits their broader use.

Many conventional cell therapies can only be directed to target a single cancer antigen, limiting their effectiveness when cancer further mutates or where cancers express different antigens, which is especially relevant in solid tumours.

According to Prescient, this changing trend heralds a “paradigm shift” in cancer treatment with the University of Pennsylvania considered to be a pioneer and global leader in the field following multiple ground-breaking discoveries over the past decade.

The company’s OmniCAR program intends to enhance the safety and efficacy of current generation CAR therapies and will enable Prescient’s in-house development of next-generation cell therapies.

“The innovations in cell therapy have proven to be a genuine turning point in the history of medicine, but it is not without its challenges,” Penn Associate Professor Daniel J Powell Jr said.

“We believe that this universal immune receptor platform technology has the potential to overcome many of the challenges currently faced in cell therapy product development,” he added.

According to Prescient, the OmniCAR platform intends to overcome several shortcomings of current cell therapies.

The new OmniCAR approach is seeking to create “modular chimeric immune receptor cells” that decouple antigen recognition from downstream signalling. The method also employs the SpyTag/SpyCatcher covalent binding system which Prescient describes as a type of “molecular velcro” that can bind to its targets.

Moreover, OmniCAR is designed to offer control and flexibility that is beyond the reach of current cell therapies like CAR-T with Prescient claiming the platform is being developed to provide clinicians with control over cell therapy expression in vivo, by allowing them to tune cell therapy activity either up or down post-infusion.

This also enables clinicians to switch off cell therapy activity altogether by ceasing administration of binders, or in other words, a built-in “kill switch”.

“As the industry attempts to drive down the cost and time of delivering cell therapy products to patients, OmniCAR’s flexibility and control will be an increasingly valuable tool, by seeking to eliminate the need for multiple manufacturing runs per patient, and its potential compatibility with off the shelf cell therapy products,” the company said.

To stay up-to-date on company news and announcements from Prescient Therapeutics (ASX: PTX), register your details on the investor centre.

Reach Markets have been engaged by PTX to assist with private investor management.

Australian uranium mine powers down amid supply crunch