The Australian company with a solution to improve internet infrastructure

The Australian company with a solution to improve internet infrastructure

Most of us have probably become used to conducting increasingly large chunks of our lives online during the COVID-19 pandemic. Many people will find that the internet works just fine for their purposes from streaming videos to writing emails, however for more sophisticated technology companies, today’s internet infrastructure isn’t nearly good enough for what they want to achieve.

Most of us have probably become used to conducting increasingly large chunks of our lives online during the COVID-19 pandemic. Many people will find that the internet works just fine for their purposes from streaming videos to writing emails, however for more sophisticated technology companies, today’s internet infrastructure isn’t nearly good enough for what they want to achieve.

As technology continues to reach new incredible heights, the capabilities of the internet will need to follow suit. The multi-million dollar companies that are developing systems such as autonomous vehicles, smart surveillance and Internet of Things devices, are reliant on powerful internet connectivity with close to zero delay, or latency.

For many of these new smart-tech innovations, a millisecond could be detrimental to critical processes where decisions need to be made as quickly as reflexes, and the time between computer-to-computer communications could be the difference between success and failure.

The traditional infrastructure we have today – “the Cloud” – simply can’t keep up with the needs of these sophisticated systems and tech companies.

Edge computing is the solution that has been brought forward by the frontrunners of internet companies to not only combat the issues faced today, but bring the next generation of the internet.

How does it work?

To make the internet faster and more reliable, data, power and infrastructure must be physically closer to the end user. This concept is called Edge computing. 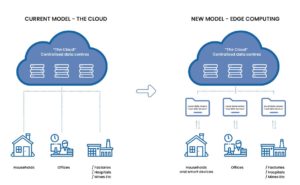 Edge computing allows you to connect a specific number of devices to a system of local data centres, where you can access and transfer data between them anywhere and anytime.

By bringing the infrastructure physically closer to the end user, the distance data must travel is vastly reduced, which increases internet speed and reduces issues like lagging and latency. To understand how this works, it is best to imagine two cars entering a race. Both race cars are the same make and model, with the same capacity. They are both equally fast, but one car starts the race one kilometre from the finish line, while the other starts just 100 meters from the finish line. It’s not hard to guess which one will win when considering that it is not the speed of the cars that determines the outcome, but instead the distance they each must travel.

The very same logic applies to data. There is a prevailing obsession with speed amongst many people familiar with the space. However, ultimately it doesn’t matter how fast the data travels when the data has to travel between an end user and a data centre that are physically far from each other.

Besides reduced latency, Edge also gives offline access to data analytics when Cloud access is not reliable, for example in remote locations such as oil fields or industrial farms. Edge devices together create their own, decentralised computing system. This results in better integration between technologies, reduced latency, quicker response times and thus improved performance.

The problem with Edge is that it’s still brand new technology with not a lot of companies finding practical, low cost solutions to actually implement it. One problem is the cost of building the high number of local data centres needed to make Edge work.

Traditionally to build a data centre, an entire team is sent to a location in order to build the physical structure in brick and mortar. Engineers must be present to equip the data centre with the electronic components, and these components are cemented into the structure never to be changed again. If an update is needed, another data centre must be built. This is a cumbersome, rigid and costly process.

This is a gap in the market that the Australian company DXN Limited has found an innovative solution for. They build small, nimble modular data centres that can be assembled like lego blocks and shipped to site in a fraction of the time and cost it would take to build a traditional data centre.

DXN Limited prefabricates their data centres in their factory in Perth. This means they can build in a controlled environment. They don’t have to send their staff to a distant location to build it, which saves time and money. One of their latest contracts with Southern Cross Cables includes building cable landing stations in the Pacific. It’s much cheaper to simply build the entire structure in-house and send it rather than deploying a whole team to a small Pacific Island!

Step 2: The data centre is deployed to site

Roughly the size of a shipping container, DXN Limited’s modular data centres are far smaller compared to traditional data centres. They can be assembled off-site and deployed anywhere there’s room like car parks or at the base of mobile phone towers. Unlike big data centres which can take years to set up, these modular data centres can be built and installed in months.

Step 3: Due to the modular design, it’s easy to update the data centre later

The data centres are modular, which means each component is independent from the others.

DXN Limited makes modules for every purpose in their data centres. They create separate modules for power, cooling, telco and IT just to name a few. In a power module you would have things like generators, UPS backups and electrical switching.

The modules can be easily added or removed without altering the existing structure. This is a benefit because you don’t have to build a data centre to full capacity from the start. You can start off small, with a minimum amount of building blocks (modules) and add more later on that later as the need arises.

DXN Limited builds their centres in stages. The first stage of their Sydney data centre, as an example, offered a capacity of 400kW. They can then add additional modules to bring it to the next stage. They can do that in a modular fashion much the same way that you use Lego blocks to build something, by simply adding another block into the piece.

This is not possible with a brick and mortar data centre. 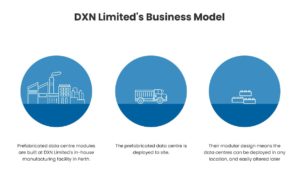 The prefabricated modular data centre market that is growing at a compound annual growth rate of 20%. DXN wants to grow its modular data centre service to the vicinity of $60 million plus per annum, in addition to generating annuity income from maintenance services and expanding its colocation services.

To learn more about DXN Limited, click here to register for company updates and invites to special investor briefings.

Reach Markets have been engaged by DXN to assist with private investor management.

Sources:
The Verge: What is edge computing?