Following more than a decade of treatments, cancer survivor Laurie Adami now plans to tackle the world’s tallest mountain to raise awareness of the drugs that saved her life.

Following more than a decade of treatments, cancer survivor Laurie Adami now plans to tackle the world’s tallest mountain to raise awareness of the drugs that saved her life.

Ms Adami’s fight with the disease began in 2006 when she was diagnosed with an incurable form of blood cancer, stage IV follicular non-Hodgkin lymphoma.

Over the next 12 years, Ms Adami underwent six different kinds of treatment, including multiple rounds of chemo and participation in a number of clinical studies.

But nothing seemed to work until 2018, when Ms Adami was chosen to participate in a phase 2 clinical trial of a relatively new kind of treatment – CAR-T therapy.

This type of therapy involves taking blood from cancer patients, using it to create specialised ‘T cells’ designed to fight cancer, and reintroducing it to the patient to train their immune system to fight tumors.

The treatment proved effective and the 3.6 kilograms of cancerous cells that riddled Ms Adami’s body were eradicated, as shown in the PET scans below. 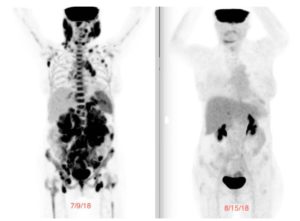 Before and after: Ms Adami’s PET scans showed the elimination of her cancer cells. Source: Stockhead

“I was blown away by the elegance of the approach,” Ms Adami told Reach Markets.

“Rather than taking man-made drugs off the shelf and sticking them into everybody, this would actually remove part of my immune system, make it smarter, make the [immune] cells just see my cancer and destroy it.”

Ms Adami now plans to trek to Mount Everest Base Camp alongside two of the doctors who worked to save her life with this cutting-edge therapy in an effort to raise money for the Leukemia and Lymphoma Society.

Although CAR-T therapy did save Ms Adami’s life, the treatment process was immensely tough on her.

The trial treatment Ms Adami was a participant in – administered by the University of California, Las Angeles (UCLA) – left her in hospital for 36 days, 25 of which were spent in the intensive care unit.

A portion of that time in hospital was also spent in a medically-induced coma, after Ms Adami suffered brain seizures.

But an ASX-listed clinical-stage biotechnology company, Prescient Therapeutics (ASX: PTX), is hoping to make the process safer through its next-generation CAR-T platform, OmniCAR.

The platform was built using technology licensed from both the University of Pennsylvania and Oxford University, which the company believe will give medical practitioners “unprecedented control and flexibility” over current generation CAR-T therapies.

“That’s great news for patients, and we’re about solving some of these problems – safety, control, knowing where to direct T cells. We are providing solutions to these.”

Unlike with conventional CAR-T treatments, OmniCAR technology allows doctors to fine-tune dosages to avoid reaching toxic levels, can be modified to respond to mutating tumors, and attack multiple tumors at once.

Mr Yatomi-Clarke said he hopes OmniCAR will allow CAR-T drugs to be used for different kinds of cancer the current generation don’t work on too, including solid cancers.

The company is currently conducting a number of studies into its cancer treatments, and in 2021 expects to complete a new dosing schedule for one of its drugs, receive top line safety results on another.

If you’d like to learn more about ASX:PTX and stay up to date on the research they are undertaking in this area, register your details on their Investor Centre.

Reach Markets have been engaged by PTX to help manage their investor communications.