Amazon ‘walks out’ its shopping experience and convenience revolution

Amazon ‘walks out’ its shopping experience and convenience revolution

As technology improves, the greatest net effect on people’s lives as developments are made seem to be around just how convenient things can be. Whilst conceivably just a decade and a half ago, one may have had to traverse through a hard copy map to find a restaurant featuring a particular cuisine whilst picking up their dry cleaning.

Now consumers can now complete the most time consuming tasks with a simple few finger swipes.

Evoking the end of history illusion, one does wonder where the nexus of technology and convenience will end. Amazon, truly recognised as at the forefront of convenience of technology have apparently identified the next part of our lives once thought essential to go – the simple act of queuing and transacting to purchase goods and services.


Last week, Amazon unveiled the next phase of what it hopes is the future of shopping, opening its first Amazon Go Grocery store in Seattle. Bringing some of the perks of online shopping into the offline world, it is a part of Amazon’s “just walk out” technology where customers aren’t required to line up at the register to pay – they simply sign in with a mobile app, grab what they need and leave.

While simple in theory, the technology behind this shopping revolution is rather complicated. Relying on a network of cameras and sensors throughout the store, each item is tracked as it is placed into shopping baskets and then added to customers’ virtual cart via the Amazon Go app. 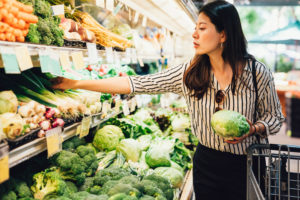 This works for each individual item, whether it be a loaf of bread, toothpaste or a single apple. When customers leave the store, the items are charged to their Amazon Go account, ultimately eliminating the need to queue to pay, carry a wallet or even interact with fellow shoppers. The model also frees up time for staff to focus on other aspects of the business, such as restocking shelves and providing customer care.

Amazon is well known for disrupting markets and improving customer experiences across several fronts, and it’s expected that the Go Grocery concept store will be no different. Considered one of the Big Four tech companies alongside Google, Apple and Facebook, its sheer global success shows that when Amazon plays, it plays to win. The company has already achieved “just walk out” success with its 25 Amazon Go convenience stores in the US. Go Grocery will follow the same technology rules, but on a much larger scale in terms of both product range and floor space.

Although there is little doubt in the technology’s ability to perform, there are questions being raised on whether a potential boom of Go Grocery stores will be welcomed by the general public. The United Food and Commercial Workers International Union (UFCW) has criticized Amazon for jeopardizing millions of  job opportunities, as the store’s fast and convenient model would require a lower number of staff compared to traditional grocers. While the company hasn’t disclosed the actual employee count, at least five workers have been seen roaming the floor.

Critics are challenging the concept store by saying that it is “de-personalising” food and creating new barriers for social interactions. A person could potentially do their entire weekly shop without speaking to another human-being, which would be loved or hated depending on whether you like to chat with the cashier at the checkout. One also wonders what this technological revolution will do for job creation (or lack of) in the retail sector.

There is also the slightly dystopian notion of considering if shoppers feel comfortable shopping knowing that their every action is being watched by incredible high-tech cameras and technology.

No matter how the new grocery store will be received, there is no doubt Amazon’s Go Grocery stores are a visionary step showing how much technology can achieve in terms of convenience and user experience.