Google Cloud launches in Melbourne. Why we need the cloud

Google Cloud launches in Melbourne. Why we need the cloud

Google recently announced launching its second Google Cloud Platform (GCP) in Australia, set to go online in 2021 in Melbourne. The first one was launched in Sydney in 2017.

Google is part of the FAANG group of companies. Originally coined as an acronym for Facebook, Apple, Amazon, Netflix, and Google, there are now many more represented. Collectively, FAANG stocks are valued three times the S&P and ASX 200. They hold 17% of the value of the S&P 500 and 9% of the MSCI World.

Google is a front runner of cloud-based technology with its ‘Integrated SaaS solutions’ (software as a service) such as Google Drive and YouTube.

And it’s not a surprise that Google is expanding with its GCP. Cloud is the infrastructure of the future as a more reliable, cost-effective, and secure option than on-site storage.

Although the cloud is no longer a new idea, its full capabilities are just now being fully understood by companies.

30% of all tech providers have moved to cloud-only storage in the past year alone. They’re essentially ditching old fashioned onsite hard drives and servers in lieu of storing their data off-site, in bigger, more efficient locations. These off-site data centres are the building blocks of the cloud, where data lives.

The appeal of the cloud might not be obvious at first sight – after all, why does it matter where data is stored?

For companies with large amounts of data, moving to the cloud can significantly reduce cost. Establishing and running their own on-site ‘data centres’ can be expensive and hard to maintain. Using the cloud, they don’t have to hire technicians to install the servers and they don’t have to worry about maintaining it or buy extra hard drives to back up in case of a system failure. This is all taken care of to a much more professional degree in off-site cloud data storage. Businesses can access their files from anywhere, and they can easily scale up when they need to, without suddenly facing the cost and logistical challenge of buying more equipment themselves. 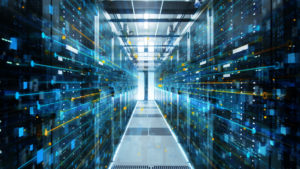 That’s why colocation data centres are becoming increasingly popular. They allow different businesses to rent space for data storage. These centres have their own entire infrastructure including cooling, bandwidth and security and so have a lot more to offer for a fraction of the price of what businesses would be able to get if they had to store their data locally.

While big industry players such as Google and Amazon have made the cloud a priority for years, Australian companies are now just beginning to consider this market.

As Australia’s technological data storage companies enter the arena, they might be positioned to play a role within the Edge data centre space.

Edge computing is like a cloud for your business that is personalised, where all devices are connected to one another. You don’t need to rely on the traditional network as Edge devices come together to create their own, decentralised computing system.

This means real-life data doesn’t suffer from latency that can impact performance. As the internet needs become more sophisticated, and with an increasing number of devices becoming connected to the internet, Edge computing is a way to keep latency fast.

The way to make Edge happen is to improve data centre design and build more and better versions locally. Modular data centres are an affordable and scalable way to do this.

Normal data centres are permanent and rigid. They have to be built into a single unit that can’t later be changed or expanded upon easily. They are slow to set up. They’re fine when building huge centralised data centres – such as Google’s new Melbourne platform – but are not easily deployable in many smaller local spots.

A modular data centre consists of purpose-built engineered modules and components which offer scalability and capital efficiency for customers.

Each module is like a lego brick that can be fitted, altered or exchanged independently of all the other parts.

There are modules for each kind of functionality, such as cooling, power, telco and IT.

In a traditional data centre, these would all be built into a rigid structure. So in order to expand the data centre or change a component, it would have to be rebuilt. But in a modular data centre, each lego piece can be taken out or added individually.

This means a small Edge modular data centre could be deployed very quickly, containing only the building blocks and space needed for the project at the time. But as it scales, new modules can easily and quickly be added onto it.

Put simply, modular data centres will allow for the modernisation of local, Australian businesses to cope with the demands of an increasingly technological world.

Our team of contributors publish regular articles that look to take a view on the world of finance, world news, technology and trading. For more news and insights, subscribe to our newsletter here.