In the battle against blood cancer, chimeric antigen receptor T cell (CAR-T) therapy is proving to be a shining light on the horizon.

In the battle against blood cancer, chimeric antigen receptor T cell (CAR-T) therapy is proving to be a shining light on the horizon.

Dr Allen Ebens has been a part of the revolutionary therapy’s development since the early 2000s, when he was director of research oncology with US-based biotechnology company Genentech.

In the nearly two decades that followed, Dr Ebens has been a familiar figure in the treatment’s development, and today serves as a non-executive director with Australian biotechnology company Prescient Therapeutics (ASX:PTX) – another leading business in the technology’s ongoing development.

Speaking to Reach Markets, he said he “just got so excited” in those early days seeing the phenomenal results coming from CAR-T tests.

“Never in my life have I seen a therapy where you’re in Phase I – you have a completely unoptimised therapeutic that you’re simply testing for safety – and you’re getting response rates that are 70, 80, 90 per cent,” he said.

“That’s an insane level of activity, and the chance to be part of that was pretty exciting.”

By 2014, Dr Ebens had been appointed senior director of discovery research at CAR-T pioneer, Juno Therapeutics. Juno was acquired by Celgene for US$9 billion in 2018, which was subsequently bought by Bristol-Myers Squibb in 2019 for US$74 billion.

Although Juno’s CAR-T treatment was still in its early development at the time, Dr Ebens said he and his team already knew CAR-T had the potential to be a groundbreaking treatment.

More recently, Dr Ebens said there has been an “explosion” of new research into CAR-T therapies, with newer versions of the treatment more effective and more targeted than those early iterations.

“Prescient’s own efforts are making CAR T treatment not only safer, but easier to manufacture,” he said.

This is critical to CAR-T’s development, as production of these so-called “living drugs” continues to be one of the major challenges for the industry (more on that later).

And the treatments currently in development are designed to be used over longer time frames – sometimes months or years – and reduce the risk of cancer relapse.

The OmniCAR platform, developed by Prescient using pioneering technology from the University of Pennsylvania, will enable in-house development of next-generation CAR-T therapies and create opportunities for collaboration and business development within the field.

Conventional drugs are typically comprised of small molecules which can be chemically synthesised in large quantities – sometimes in hundreds of kilograms. These are then processed into smaller dosages, which normally contain only a few milligrams of the original molecule.

“You’re making hundreds of thousands or millions of doses in one run, and you can characterise it down to the last hydrogen bond and you can be confident this is the drug substance,” Dr Ebens said..

CAR-T technology differs greatly – beginning by drawing blood from a patient. This blood is then treated, and its T cells (a vital part of the immune system which identify and assist to kill tumours and/or infected cells) are separated out. The T cells are then genetically modified to produce synthetic receptors.

These receptors (the ‘chimeric antigen receptors’ or CARs) allow T cells to identify specific proteins (or ‘antigens’) on cancer tumour cells. The modified T cells are then “expanded” – a process which duplicates the cells hundreds of millions of times – and then reintroduced to the patient. 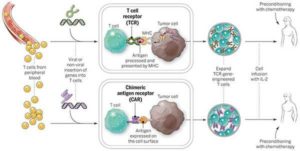 “It’s a very different paradigm to something like aspirin, where nobody knows who the patient is but there’s 100 kilotons of the stuff over there and you can pack it and stick it on a shelf.”

An industry in its infancy

In 2019, global market revenues for CAR-T were roughly US$700 million, according to data from research firm McKinsey.  McKinsey forecasts expect it to continue growing in the years ahead, reaching just over $10 billion by 2024.

But the company cautioned further investment is needed to “unlock the full potential” of this new treatment.

To learn more about Prescient Therapeutics and stay up-to-date on upcoming news and announcements, register your details on their Investor Centre.

Reach Markets have been engaged by PTX to help manage their investor communications. 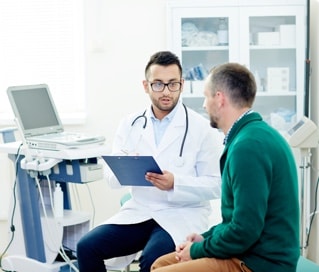 Learn how Prescient Therapeutics (ASX: PTX) are moving the cancer conversation from “fight” to “cure”.