Back to research & News
Analyst Research

We rate TCL as a Buy for the following reasons:

We see the following key risks to our investment thesis:

Transurban (TCL) again delivered a solid result with toll revenue and operating earnings (EBITDA) up +8.7% and +10.2%, respectively, on previous corresponding period (pcp). Margins across the segments improved, with group EBITDA margin expanding by 100bps to 74.9%.

Management have guided towards FY19 distribution of 59cps (including 2cps fully franked) versus current consensus (median) estimates of 60.5cps. Whilst this may disappoint some, we believe there is upside risk to this guidance in the event TCL is unsuccessful in bidding for WestConnex, as management noted this guidance will remain even if TCL wins the bid.

We maintain our buy recommendation. TCL offers attractive assets, growth in earnings / distribution stream and growth opportunities offshore. With TCL’s inflation protected revenue stream, a ~5% yield which is growing high-single digit per year is attractive, in our view. Further, we note the spread between TCL’s current dividend yield and the Australian 10-Yr bond yield is 2.34% versus 5-yr average of 1.88%.

Our analysts are ready to answer any questions you have 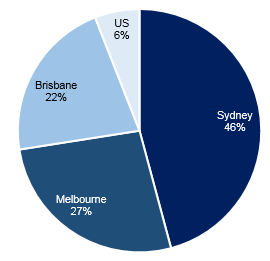 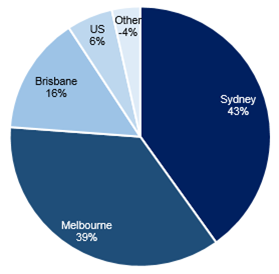 Sydney. FY18 proportional toll revenue was up +8.3% to $994m off the back of a +3.1% growth in traffic. The NorthConnex project is tracking as planned, with the construction efforts expected to remain within TCL’s budget. Notably, the Company also agreed to acquire an additional 8.24% equity interest in the M5 motorway, taking its total stake to 58.24%.

Melbourne. Melbourne toll revenue was up +13.4% to $780m for the year, supported by a +1.4% growth in traffic. EBITDA growth also came in at a strong +15.7% at $688m compared to the pcp. The construction of the West Gate Tunnel project is moving along as expected, with completion being anticipated in 2022.

Connected Automated Vehicle (CAV) Trials. TCL is currently running trails in Melbourne, Sydney and the Greater Washington Area (GWA). TCL’s exploration of this type of technology comes on the back of the advent of automated vehicles which have an undeniable presence in the outlook of the transport industry. In both Sydney and Melbourne, TCL have undertaken programs alongside the Victorian Government and similar bodies (including Transport for NSW and RMS) to trial automated vehicle interaction with motorway infrastructure. Trials in GWA are also underway alongside the Federal Highway Administration and Virginia Department of Transportation, facilitating tests for roadside unit communication and vehicle-to-vehicle interaction. While this project is indeed in its preliminary stages, we see TCL’s efforts to both adapt and capitalize on an inevitable industry shift.

Debt position. The Company maintained its strong balance sheet discipline, keeping gearing levels consistent (35.2%) and improving the FFO/Debt (funds from operation) ratio to 8.9% (from 8.5%). Management on the analyst call also noted the small component of debt (less than $600m) that will be refinanced closer to current market levels of around ~5.0%, from existing levels sitting near the high ~6.0%. 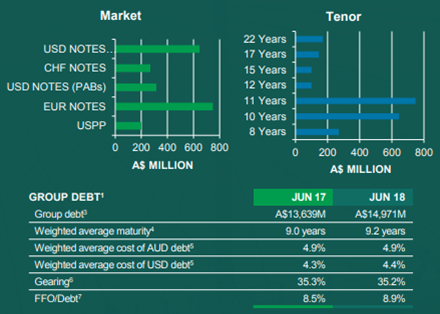 A25 acquisitions in Montreal, Quebec. In March, TCL agreed to acquire 100% of the equity interests in the A25 from Macquarie Infrastructure Partners for CAD840m + transactions costs of CAD18m. The acquisition in Montreal grants TCL access to a 7.2km toll road and bridge that has seen average annual traffic growth of approx. ~4% over the last 3 years. Additionally, the asset offers favourable demographics in the metropolitan area with stable population growth and density, which is significantly higher than the Company’s other existing operating regions. The A25 since financial close on 5 June 2018, has contributed $5m to toll revenue and $1m to total costs.

An expensive price to pay? The CAD840m investment represented an acquisition EBITDA multiple of 26.0x. On a financial headline basis, Transurban trades at a 1-year forward EV/EBITDA multiple of 21.6x which would indeed suggest that this was a slightly expensive purchase for the Company. However, we note the unrealised potetial that are achievable in an increasingly favourable demographic area. While Montreal’s population levels sit behind Melbourne, Sydney, and Washington at 4.0m, the region has a population density of over 1,000/km2, far exceeding TCL’s other operating geographical segments in Brisbane (~200/km2), Melbourne (~600/km2), Sydney (~500/km2), and Washington (~500/km2). So, while we admit the acquisition did come on the pricier end, the A25 asset offers TCL strong geographical diversification (in a portfolio that heavily concentrates itself in Australia) and exposure to favourable demographic trends.

Bond proxy theory. Whilst risk is currently being re-priced in the market (i.e. rising bond yields), TLC’s share price may see some weakness. However, as we have pointed out before, as interest rates rises are likely accompanied by rises in inflation, investors need to appreciate that TCL’s revenue is inflation linked. That is, rising inflation leads to higher revenue, whilst there is a lag for inflation to be reflected at the costs line. Further, as the chart below highlights, we note the spread between TCL’s current dividend yield and the Australian 10-Yr bond yield is 2.34% versus 5-yr average of 1.88%. 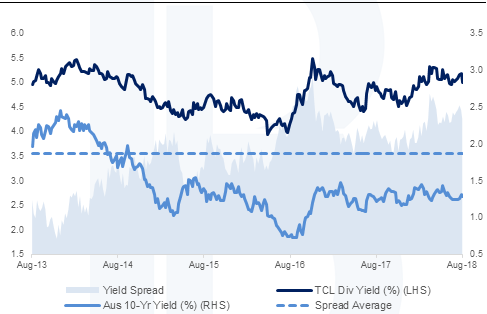 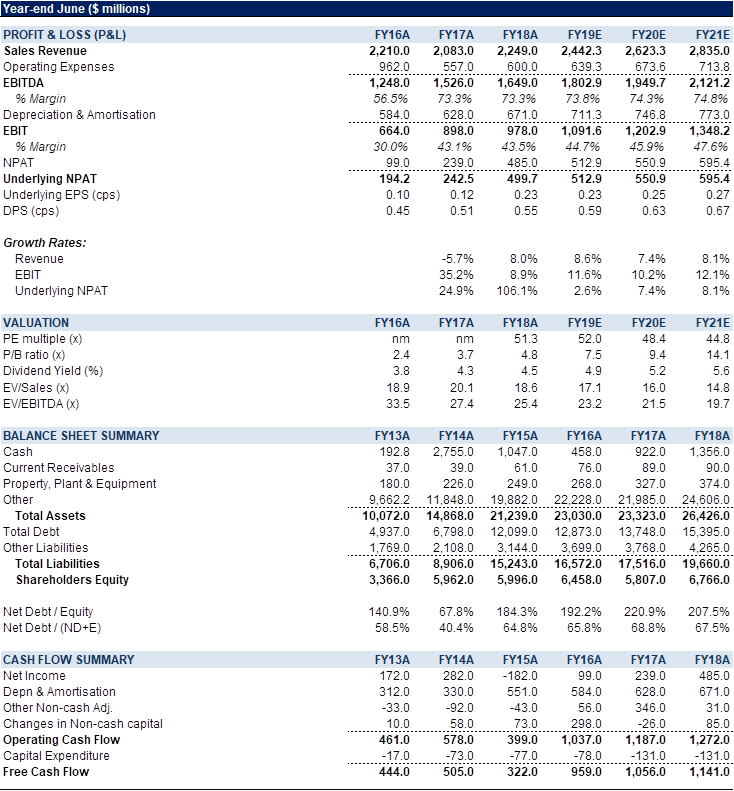 It is recommended that you seek independent advice and read the relevant Product Disclosure Statement before making a decision in relation to any investment. Any advice contained in this communication is general and has not taken into account the investment objectives, financial situation and particular needs of any particular person.

The material in this document has been obtained from sources believed to be true but neither Banyan Tree nor its associates make any recommendation or warranty concerning the accuracy, or reliability or completeness of the information or the performance of the companies referred to in this document. Past performance is not indicative of future performance. Any opinions and or recommendations expressed in this material are subject to change without notice and Banyan Tree is not under any obligation to update or keep current the information contained herein. References made to third parties are based on information believed to be reliable but are not guaranteed as being accurate.

Banyan Tree and its respective officers may have an interest in the securities or derivatives of any entities referred to in this material. Banyan Tree does, and seeks to do, business with companies that are the subject of its research reports. The analyst(s) hereby certify that all the views expressed in this report accurately reflect their personal views about the subject investment theme and/or company securities.

Although every attempt has been made to verify the accuracy of the information contained in the document, liability for any errors or omissions (except any statutory liability which cannot be excluded) is specifically excluded by Banyan Tree, its associates, officers, directors, employees and agents. Except for any liability which cannot be excluded, Banyan Tree, its directors, employees and agents accept no liability or responsibility for any loss or damage of any kind, direct or indirect, arising out of the use of all or any part of this material. Recipients of this document agree in advance that Banyan Tree is not liable to recipients in any matters whatsoever otherwise recipients should disregard, destroy or delete this document. All information is correct at the time of publication. Banyan Tree does not guarantee reliability and accuracy of the material contained in this document and is not liable for any unintentional errors in the document.

The securities of any company(ies) mentioned in this document may not be eligible for sale in all jurisdictions or to all categories of investors. This document is provided to the recipient only and is not to be distributed to third parties without the prior consent of Banyan Tree.