A numbers game: Americans to wager $6 billion on Superbowl

A numbers game: Americans to wager $6 billion on Superbowl

In the build up to next week’s Superbowl, this is likely to be the last one for many Americans to be gambling illegally on. The floodgates have been opened and the United States are joining the legal sports betting party, which will create a whole new domestic economy and one which investors should be watching closely.

In the build up to next week’s Superbowl, this is likely to be the last one for many Americans to be gambling illegally on. The floodgates have been opened and the United States are joining the legal sports betting party, which will create a whole new domestic economy and one which investors should be watching closely.

The American Gaming Association estimates that the U.S. sports betting market is worth $150 billion annually, of which only $4.19 billion was turnover through registered sportsbooks in the State of Nevada in 2018 from January through to November. For next week’s Superbowl, the biggest annual American sporting event, roughly $6 billion will be wagered between both legal and illegal means.

Following a landmark decision from the U.S. Supreme Court in May of 2018, the ruling overturned a 1992 law which barred sports betting from taking place in the United States beyond Nevada and New Jersey. Since that ruling, the wheels have started churning with others passing legislation to legalise sports betting within their States, and gain access to millions of dollars worth gambling tax revenue.

Using Australia (circa 2008) as a case study when bookmaking conglomerates emerged in the tax-friendly haven of Northern Territory, where corporate tax is capped (at 500,000 revenue credits, now $575,000); sports betting in Australia was a boon. Sportsbet, Ladbrokes, Bet365 and Tom Waterhouse become household brands with advertising plastered across televisions screens, billboards, train stations and sporting arenas. 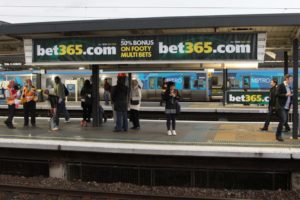 Richmond Station, next to the Melbourne Cricket Ground in Melbourne, Australia (2012).

A study conducted by the Queensland Treasury in 2017 revealed Australians wagered $33.9 billion on racing and sports for the 2016/17 financial year.

Using an industry standard 4.5% vig (house cut) on any head-to-head markets (higher for horse racing), the $33.9 billion wagered would have netted bookmakers a minimum of $1.52 billion. But total losses for that financial year was declared at $4.37 billion in the report, or 12.89% of total money wagered.

From that 4.5% vig, the guaranteed profit for each wager is split between tax revenue, licensing fees and company profit where havens like Northern Territory have largely issued these foreign companies a license to print money by capping corporate tax.

These are the stark figures from which the term ‘The House always wins’, stems from and why conglomerates Paddy Power, William Hill and Ladbokes-Coral so eagerly entered the Australian market, flooding our sport-friendly nation with advertising and promoting a culture of sports betting.

Fast-forward 10 years and we have a situation in the United States where over the past 8 months, State legislation to legalise full-scale sports betting has been passed in the States of New Mexico, Pennsylvania, Rhode Island, West Virginia, Delaware and Mississippi with bills also recently passed in New York and Arkansas. Beyond this, bills have been introduced in 27 other States with there being no reason presented for states not to pass the legislation and earn their share of gambling tax revenues.

Through the rise and accessibility of sports betting via the internet, betting products have evolved significantly over the past decade with tech giants entering the fray against established bookmaking companies. It is this involvement from tech companies that has seen a rise in stock-market-like betting exchanges and monetised fantasy sports which have created a segment of the sports betting market that is engaging with younger audiences who crave real-time complex data.

In this modern age of big data and technological capabilities, it is inevitable that tech giants will be involved in the sports betting market for their data capability and infrastructure. Microsoft already owns betting exchange tech patents so the likes of Google and Amazon would have started the conversation too. We now have a perfect storm brewing where the old world of sports betting will meet the new world of technology which will present some excellent opportunities for investors to get a share of this greenfield market in the United States.

Reach Markets have been watching this space very closely since the legislation was passed in May 2018, and will shortly have an investment opportunity in a company positioned to capitalise on this change to  the U.S. sports betting industry, exclusively for Sophisticated 708 Investors. Register here to get the details when they become available.