This is what the future of cars will look like

This is what the future of cars will look like

Nothing has stirred our curiosity through the years more than imagining the ultimate mode of transportation. The car has long been a symbol of financial freedom and the ability to decide one’s own journey. It has been, and still is, so much more than just a vehicle.

Nothing has stirred our curiosity through the years more than imagining the ultimate mode of transportation. The car has long been a symbol of financial freedom and the ability to decide one’s own journey. It has been, and still is, so much more than just a vehicle.

As the famous author E.B. White said, “Everything in life is somewhere else, and you get there in a car.”

But the modern car has also become a topic of hot discussion. How can we justify driving when cars are some of the biggest contributors to global warming?

In 2010, a NASA study said that automobiles were the largest contributor of climate change pollution in the world. “Cars, buses, and trucks release pollutants and greenhouse gases that promote warming, while emitting few aerosols that counteract it,” the study said.

The desire to own cars – and to be able to go anywhere, anytime, – is a culture that is hard to change so what many car manufacturers are doing instead is trying to adapt the modern car into a car of the future.

That is why in 2030, you probably won’t drive a car with a combustion engine anymore, but an electric engine instead.

Electric vehicles only make up 2% of the market share at the moment, but the price is forecast to drop below that of petrol cars in the next 5 years. If that happens they’ll become a viable option for the average Joe by 2030.

The adoption of alternative fuel cars will likely happen faster in some countries including the Netherlands who plan to roll out a ban on new petrol and diesel cars by 2030.

Breakthroughs in energy generation and storage technology for hydrogen-powered vehicles could make the transition happen even faster.

The car of the future will be vastly different than what we have today, so it’s likely that it isn’t the traditional car manufacturers that will carry out the changes but that it’s large tech companies such as Tesla, Apple, Dyson and Google that will become the leading car companies of the future.

As well as electrification or other alternative fuels, automation will fundamentally change how we make, run, use, and own cars.

“Self-driving cars are the natural extension of active safety and obviously something we should do,” said Elon Musk.

There are already many cars on the market these days with partial automation. The automated features help drivers avoid collisions or parallel park. With fully automated vehicles well under way from the likes of Google and Uber, it’s a matter of time that self-driving cars become a normal sight. It could well be within this decade. 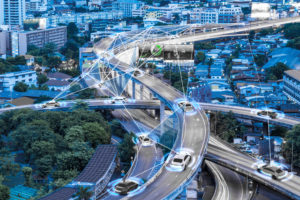 Nervous about handing the wheel over to a robot? This is going to be the biggest obstacle for user adoption. To ease those nerves, car manufacturers will likely provide augmented-reality systems that project the car’s decisions onto a surface like the windscreen.

Many components of the car will change. Cameras and sensors will likely replace mirrors; windows will no longer be needed for the driver to see traffic, instead, they would be solely ornamental or be non-existent for more privacy. Some cars, like Mercedes-Benz’s concept car URBANATIC, the windows will even be adjustable.

The interior of future cars will be far more customisable than today. Smart glass will allow us to control the light coming through the window – or repurpose it as a screen. Passengers will be able to adjust the layout with the touch of a button so they can relax while the car takes them from A to B. Volvo’s 360c concept car even offers a convertible multi-functional space that can be used as a lounge, an office, or a bedroom.

For people who live in urban centres, car ownership will likely fall out of favour. Instead Uber-style autonomous vehicles will become the most popular method of car transport.

Drivers will be able to communicate with cars through speech or gestures. In the higher-end models, there might even be early versions of brain-computer interfaces where you can literally control your car with your mind. Such technology already exists in prosthetics and wheelchairs.

Internet of Things (IoT) connectivity will be central to how our cars move and communicate with everything around them. Sensors will recognise road signs, markings, cameras, pedestrians, and other vehicles. Thermal sensors will be able to see much further than what car headlights can currently offer. This could substantially reduce the number of road accidents.

As well as improved safety, IoT technology will allow self-driving cars to maximise on fuel economy while syncing up movements and improving traffic flow.

A lot can happen in 10 years. If you think back to 2010, smart phones were still a new thing and social media was in its infancy. Today we can barely get by without them.

As cars become smarter, the traffic systems will have to keep up with the changes too.

Many cities around the world are already starting to implement smart technologies that, just like innovative cars, would be an aid for more efficient and less polluting streets.

Cities are responsible for 70% of global CO2 emissions every year – equal to 5 billion cars on the road. In cities, inefficient traffic, utility, and lighting infrastructure are some of the major emissions culprits. Smart cities must evolve alongside the car to accommodate a more livable future.

Traffic Technologies (ASX: TTI) is an Australian company that is already working hard to make this a reality. TTI addresses four fundamental needs of future Smart Cities including energy savings, CO2 emission reductions, environmental protection, and cost reduction. In 2019, TTI turned Oakleigh into one of Melbourne’s first smart suburbs. They installed a range of smart technologies such as IoT LED street lighting, bin sensors, and parking sensors. These help the council to manage public assets more efficiently. They have also installed thousands of LED streetlights across six Tasmanian councils. Traditional street lights contribute to 30-60% of local governments’ CO2 emissions. TTI’s solution reduces energy use and lessens the environmental impact of this essential infrastructure.

If the electric autonomous car is the vehicle of the future, and the Smart City could be the infrastructure that complements it.

To receive updates on Traffic Technologies‘ (TTI) company news and announcements, please register your details on their Investor Centre.

Reach Markets have been engaged by TTI to assist with private investor management.

Sources:
Brainy Quotes
The Conversion, Cars will change more in the next decade than they have in the past century
Medium, The Future of Self-Driving Cars
Reach Markets, Cities need to get climate smart